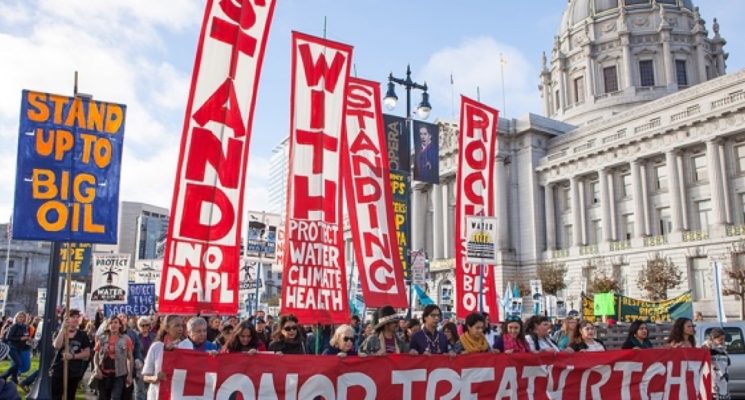 On June 8th,  2017, Wallace Global Fund presented the inaugural Henry A. Wallace award to the Standing Rock Sioux Tribe for its brave resistance in defending sacred land and water against the Dakota Access Pipeline.  Standing Rock Chairman Dave Archambault II accepted a $250,000 award on behalf of the Tribe.  In addition, WGF pledged up to a million dollar in investments to support new renewable energy projects led by the Tribe, as an alternative model for economic development and energy justice. The HAW award was established in 2017 to commemorate the legacy of the Fund’s donor, by highlighting extraordinary examples of courage in standing up to abuse of corporate and government power.

The award ceremony featured a video (below) emphasizing the courage and activism of the Standing Rock Sioux and the progressive values and legacy of HAW.  Featured speakers included: WGF Board Chair Scott Wallace, Standing Rock Sioux Chairman Dave Archambault II, and Nick Tilsen of Thunder Valley Community Development Corporation. The ceremony was followed by a donor and investor briefing on the renewable solar and wind energy projects at Standing Rock.  Speakers at the briefing were led by Wahleah Johns of Native Renewables, Barrett Raftery of the GivePower Foundation, Marco Krapels of Empowered by Light, Michael Geffrard of LIATI Group, Daryn Dodson of the Calvert Foundation, and Thomas Van Dyck of SRI Group at RBC Wealth Management.