The Right To Water 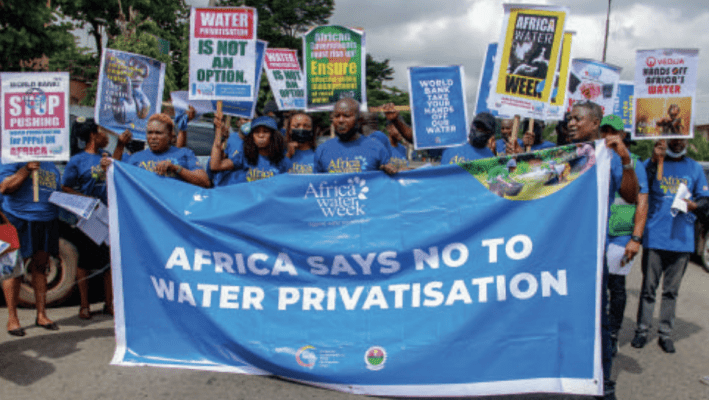 As the world faces the intersecting crises of climate change, corporate capture of governments, and a global health pandemic, access to safe clean and accessible water has never been more essential nor under such dire threat.

One in four people do not have access to clean water, and more people die from unsafe water than all types of violence, including war. The UN warns that, due to climate change and increased privatization, more than five billion people could experience serious to severe water shortages in 30 years. Even in the US, water bills increased at three times the rate of inflation from 2000 to 2014 while both household incomes and government funding for water services decreased.

In response, a global movement opposing the privatization of water has arisen, first sparked in the 1980s by Britain’s decision to privatize the water system. The Cochabamba Water War began in Bolivia in 1997 when people began revolting against the privatization of municipal water supplies by the Bechtel corporation. Massive protests, some of which met violent government resistance, succeeded in ending Bechtel’s role. In 2006, activists from around the world held an International Forum in Defense of Water, and the water justice movement began to grow globally.

Water justice activists across the world have focused on creating change at three different levels. At the international systems level, advocates are pushing for international agreements that protect the human right to water and hold corporations accountable. At the national level, the movement works to fight the privatization or contamination of water systems by corporations and pressure governments to protect affordable access to safe and clean water. And finally, on a local level, the movement works to foster community and learning while supporting national campaigns.

Wallace Global Fund has supported this nascent movement for two decades. We see this work as essential to our intersectional values and to our strategic priorities of protecting the environment and opposing unchecked corporate power. In addition to our direct support of grantees, we work to educate other donors and raise needed funds to build a strong global and trans-local movement.

Today, these groups are coming together to build a global water justice movement, demanding governments meet the fundamental human right to water enshrined by the United Nations in 2010, and fight the privatization of water by corporations and large development banks.

“We have a planet that is at risk, where resources don’t have a permanent life,” Archbishop Desmond Tutu said. “We are going to have to make the decision: are we going to survive or are we waiting for our extinction? One day we will wake up and find people are fighting not for oil but water.”