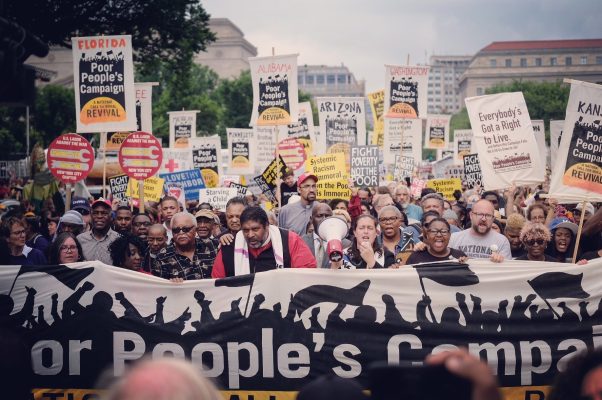 The third Henry A. Wallace Award was presented to the Poor People’s Campaign: A National Call for Moral Revival for building a bold moral fusion movement that catalyzes people-driven power, activism, and participation to challenge the interlocking injustices of systemic racism, poverty, economic devastation, militarism and religious nationalism.

The Poor People’s Campaign: A National Call for Moral Revival is co-chaired by Rev. Dr. William J. Barber II, president and senior lecturer of Repairers of the Breach, and Rev. Dr. Liz Theoharis, director of the Kairos Center.  It is rooted in the legacy of Dr. Martin Luther King, Jr., who called for a “revolution of values” in America through the formation of a far-reaching movement to unite poor and impacted communities. Today’s “Poor People’s Campaign” is rooted in that historic commitment.

This movement engages people from all corners of the United States in the fight to restrain the power of profit-driven corporations. It fiercely advocates for transformative government interventions to right the wrongs of a society that puts corporate profits over the interests of people and the planet. In communities, state legislatures, and in the nation’s Capital, the Campaign fights for justice by organizing working class and marginalized communities, and holding elected officials accountable to the people they are meant to serve.

In 2019, the campaign brought together over 1,000 community leaders in Washington, D.C. for the Poor People’s Moral Action Congress and the release of a landmark Poor People’s Moral Budget. Their subsequent 40-state listening tour led to an unprecedented Digital Mass Poor People’s Assembly and Moral March on Washington on June 20, 2020. Wallace Global Fund presented the Henry A. Wallace Award to the Poor People’s Campaign on the eve of this historic Digital Assembly, helping to ensure that the Campaign’s powerful call to action was amplified in every corner of the nation, despite the challenging isolation of the COVID-19 pandemic.

Since receiving the Award, the Campaign has continued to fight for democracy, justice, and equity. On issues ranging from climate change to voter suppression to the impacts of COVID-19, the Poor People’s Campaign is unwavering in its call for bold, necessary action. From West Virginia to Washington, DC to Wall Street, the Campaign speaks truth to power by elevating the profound voices of the people who are most impacted by the challenges of our time.