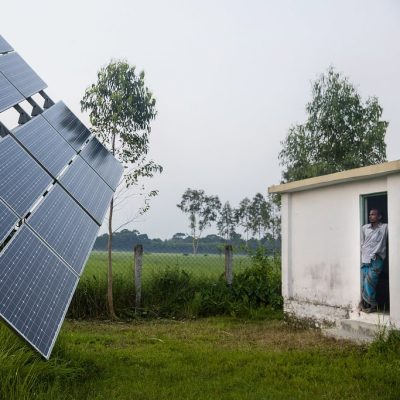 As such, Wallace Global Fund has carved out two priority areas for highly transformative impact investments to advance a new energy economy that is led by communities, centers justice, creates new economic models and opportunities, and explicitly prioritizes those communities which have been harmed by fossil fuel extraction or neglected by the fossil fuel economy.  These two areas are broadly defined as energy justice–indigenous led and owned renewable energy projects–and energy access–off-grid distributed energy projects for communities lacking access to electricity. Wallace Global Fund has committed to deploying at least one percent of our endowment investments into energy justice and access, as well as grants totaling at least $1 million per year.

Energy Justice: Wallace Global Fund is working with Indigenous communities to fuel economic development by investing in solar and wind farms that are locally owned and managed. We are committed to ensuring that those communities most impacted by climate change, pollution, and injustice have a voice in determining the building of the new energy economy.

The Standing Rock Sioux Tribe (SRST) became nationally and internationally recognized for their leadership protesting the Dakota Access Pipeline, which poses a threat to drinking water for Standing Rock and millions of others who depend on the Missouri River. In the wake of this movement, SRST has renewed and deepened their commitment to sustainable energy and institution building at the Standing Rock Reservation.

To help SRST meet these commitments, Wallace Global Fund made a catalytic investment into a planned grid-scale wind farm to be owned and operated by the Tribe. Once completed, it will become the single largest revenue source for SRST.

In the past, Navajo communities had little say in the energy projects on their land and were forced into deals with energy companies that did not have their interests at heart. For years, Navajo people received well-paying but hazardous jobs at coal and uranium sites, but those jobs are now disappearing as the mines and plants close down. At the same time, about 15,000 Navajo homes still do not have power despite the industry’s predation.

Energy Access: With over 800 million people worldwide lacking access to electricity or other forms of energy, universal energy access must be prioritized as the world transitions to clean, renewable energy. Aligned with our grants, Wallace Global Fund has prioritized investments in decentralized renewable energy projects in areas that have been neglected by the fossil fuel economy.

Small-scale and distributed renewable energy systems offer a way to move past fossil fuel development and provide women with access to clean, modern and sustainable energy. The COVID-19 pandemic further proved the value of decentralized energy systems, as we learned how access to vaccines and medication for rural communities requires adequate energy and refrigeration.

Launched by Wallace Global Fund in collaboration with Sustainable Energy for All and GreenFaith, the SHINE Campaign aims to accelerate support, funding, and investment for clean, distributed energy solutions for the world’s most marginalized communities.

The SHINE Campaign has built a project pipeline of under-resourced energy access projects in anticipation of launching a new investment facility. The pipeline has identified 100 promising, early-stage energy access enterprises across Africa, India, and Southeast Asia, many of which are community- and women-led.

Additionally, the Fund invests in pioneering companies like M-Kopa, Off Grid Electric, D.Light, BBOXX Kenya, and others. We are invested in these companies through several investment vehicles which prioritize the nexus of women and energy access. The Fund’s investments in energy access and energy justice now comprise 1.4 percent of our total portfolio.